Only one newsworthy item on the agenda. A GPIP (General Plan Initiation Proposal) that was seeking to change a 3.82 plot of Commercial Retail (CR) land into Highest Density Residential (HHDR).

As with other GPIPs, this was just a chance for the developer to get a sense of what the Planning Commissioners thought. There were no votes cast in regards this project. Just as there won't be any when this comes before the city council in April.

With that established, what is this proposal?

In short, 94 units of apartments, in four story buildings on 3.82 acres of land behind the shopping center called The Shops at Clinton Keith. The ingress/egress would be from Hidden Springs Road.


There was a presentation by the planning department, and another by the developer, David Horenstein, followed by public comments, then final comments from the commissioners.

► Loss of potential land use opportunities and sales tax revenues.
► Loss of potential jobs for Wildomar residents.
► Land use compatibility with high density apartments adjacent single family residential zoned properties and residences.
► Development of 94 more apartment units that would be added to the 1,245 apartment/condo units approved but not yet constructed.
► Potential traffic impacts.
There were three public comments.
•  Ken Mayes hated it.
•  Kathleen Hamblin was nearly coming apart at the seams as she hammered home her points, at times approaching Miss Miller level of outrage... sans the singing of course.

"This is clearly another horrible, scaled down Camelia Townhouse Project. We are a small, semi-rural city and it needs to be preserved, and to stay that way."
Points to her for adjusting the description of Wildomar to "semi-rural"
This is where she goes off the rails.

"Why do you people insist on proposing highest and high density residential developments here? The residents have expressed their views time and time again about the negative effects of apartments, condos, and townhouses in Wildomar. These kinds of development proposals are outrageously out of proportion and do not belong in Wildomar. I am opposed to any zone changes, or amendments to the general plan that will destroy our rural community and lifestyle."

I'm guessing that you have Ken proofread your comments before heading to the podium, and unless he's trying to have fun at your expense, wouldn't it be considered a kindness to help you edit out the false, or misleading, portions?

Who the hell is "you people"?

If you don't understand the basics of the process, why bother commenting on it?

Let's go over it again.

It's the landowner or developer that comes to the city, telling them what they'd like to build on their land. Not the other way around. The city didn't solicit an untenable project like these apartments.

I actually agree with many of your contentions above, but you've obviously been taught well by Professor Mayes on how to weave a couple of good points into a morass of oddball points, losing any chance at convincing the very people you're talking to.

Then the kicker, "I am opposed to any zone changes, or amendments to the general plan that will destroy our rural community and lifestyle."

It's a lead pipe cinch that 100% of the people on the city staff, the electeds (council members) and the appointeds (commissioners) agree completely with that statement.

I can only think of a handful of people that would like to "destroy our rural community and lifestyle" and they usually sit in the same part of the audience that you do. Jus' sayin'.
•  Joseph Morabito suggested that this project is most likely a real life example of The Art of the Deal. Where you come in with something that will trigger people into panicking, like the person mentioned above, and then come back with a pared down version of the project. Making it seem like they're very willing to negotiate as they appear to take the concerns of everyone to heart.

The developer, David Horenstein, the man behind many commercial developments in town, including the new Wildomar Square, and The Shops at Clinton Keith, gave a brief presentation.

He seemed to speak more about other properties, than the one on the agenda. He talked about a how retail isn't what it once was with Amazon taking a big bite out of traditional brick and mortar stores.

He also talked about a future Civic Center, but since that's not part of this, I didn't understand how it helped this item.
The name that he gave to the apartment complex is Solar Village, and touted it being "green"... though the rough drawings had no real recreation amenities, not even a pool or other things that I've seen in all the other apartment projects.

Horenstein brought in an odd term: Wilshire corridor. Commissioner Langworthy interrupted and asked to have it defined.

He basically threw the City Manager under the bus by saying, "I got that from Gary [Nordquist]." As he further said it refers to a district in Los Angeles.

Trying to salvage the moment, Director Bassi jumped in saying that "we refer to Clinton Keith, that stretch, as our "Miracle Mile", how we treat it, and the quality we want to see."

Commissioner Comments
► Chair John Lloyd
"I've seen Mr. Horenstein's projects before, he does very good work. I'm not concerned about that at all. I believe he has a good vision for our community as far as retail locations and layouts and such. For this specific one, I have more concerns, because I don't see a need for additional apartments at this point."
► Commissioner Mason Ballard
"At this time I don't feel I know enough about it to stand one way or the other on it. I know that high density property always strikes a chord, and you're either on one side or the other with it. I've personally lived in the apartments right behind this building, when I first moved to Wildomar, and that was a very plesant place for me and my family. They're not all bad (apartments), but we want to make sure it's done right."
I always enjoy Commissioner Veronica Langworthy's take when it comes to apartments in town. This is at least the third time I've heard her invoke "Little House on the Prairie" and how the Olsen family had a store on the ground floor, and lived above it.

Based on the orientation of that property, and it being well off the beaten path, I don't really envision too many successful mom and pop shops in that area.
► Commissioner Veronica Langworthy
"I would say that if you considered something like, first floor commercial, and second and maybe third floor, like townhouses above commercial. That might be a possibility. Something like Little House on the Prairie." 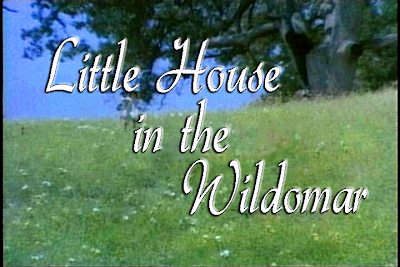 ► Commissioner Kim Strong
(Addressing Chair Lloyd) "John, I agree with you 100%. I don't think the city needs more apartments [...] I'm also concerned about the financial impacts and the impacts that Mr. Bassi brought up [...] and I don't think we have enough commercial and tax dollars coming into the city."
► Commissioner Michele Thomas
"It's hard to run a city as a bedroom city unfortunately. I always hesitate when we look at these [proposed] changes [away from] commercial use. I think we have enough apartment projects on the books already... it's a hard sell."
Complete 26 minute video below.
•                •                •
"For centuries, theologians have been explaining the unknowable in terms of the-not-worth-knowing."

Sounds like ol' Mencky could have been referring to Wildomar Rap.
This blog was produced for viewing on a desktop or a laptop. Though it's been optimized for smartphones, the formatting can look odd on a smartphone or if you get this delivered through email. Link to proper format.
Posted by Joseph Morabito at 11:42 PM