• Rumors of a Craft Beer Festival in Wildomar Are a Brewing

Oh yeah, gotta love the cheesy headline I came up with, but if all goes well, by Autumn of 2018, Wildomar will be the host area for the Santa Rosa Plateau's fund raiser involving craft beers. 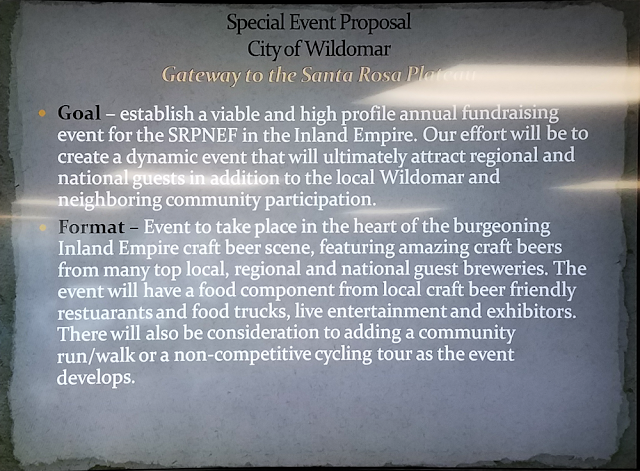 Their aspiration is to evolve this into a signature event for them and the city. Starting it off slowly, with hopes that over time it would develop into something that would bring in people from all of SoCal, and even other parts of the nation.

I'd first heard chatter about such a thing a couple of months ago, and at the recent Parks Subcommittee meeting the details were gone over by Santa Rosa Plateau's Ginger Greaves.

At the start of her presentation she played the following video in hopes of "educating you (the committee) a little more about what we do".
The power point presentation was interesting and filled with many possibilities. Clearly an idea with a lot of potential. Marna O'Brien Park was mentioned as the perfect site for at least the first several years as the event grows. 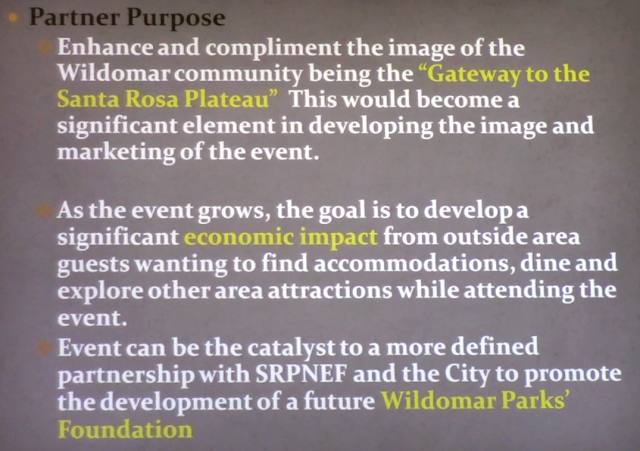 This may be reason to dust off plans for a hotel in town. I think I remember being told that there is a pad right next to city hall that is already designated for such a thing too. ☺

I'd love to hear more about the "future Wildomar Parks' Foundation." It wasn't elaborated on during the meeting.


"Marketing for the city of Wildomar. It would enhance your city profile to potential businesses and developers. Providing an opportunity for partners wanting to invest in Wildomar. [A]s your build-out evolves, and recognizing that you have a 40% undeveloped space, events like this can help portray the community as a vibrant and progressive city, with quality offerings for their residents."

—Ginger Greaves
As a longtime resident of Wildomar, one really has to like the sound of that. With the right groundwork and people behind it, this could be what puts the area on the map. A Signature Event for the city.

I know that for many years the Wildomar Rotary Club has hosted a yearly barbecue, but this year it didn't materialize. There is talk of having it come back next year, at least in some form, but it wasn't listed among the 2018 events I saw last night.

As much as I love the Rotary Club —heck, I'm even a member in good standing as of this blog ☺, I'd love to see another group of people take the lead in a key event such as the one discussed here. 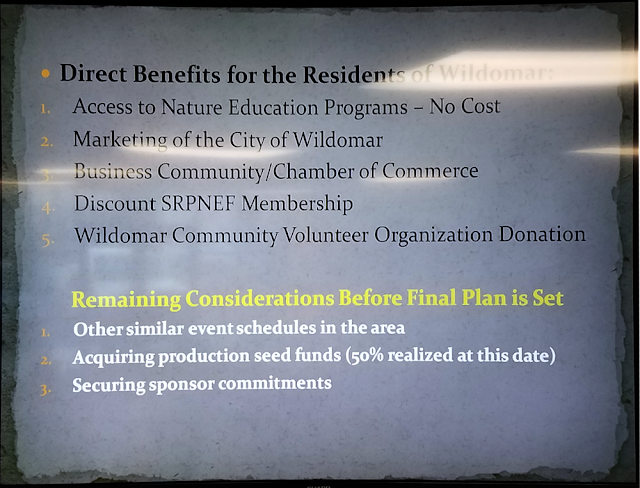 They still have a few more ducks to get in a row, then they plan on announcing the 2018 date later this year. They haven't settled on a specific date yet, but expect it to be anywhere from the last weekend in September up through the start of November.

They're looking to make sure that the date isn't in conflict with any other regional events before opting for one.


Late September seems like the best time. That way the headaches of the holiday season can be avoided.

Let's hope there's more on this topic to blog about before the year's out.

Wildomar Rap harkens back to the halcyon days of youth, and recalls the quickest path to sleep. It involved three 24 ounce cans of Steel 211. Not sure that it was all that heavenly the next day though.
Posted by Joseph Morabito at 12:55 PM