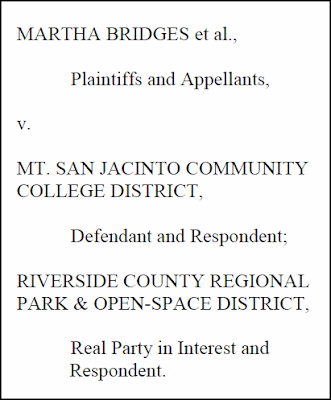 On August 8th it was made known that the 'Martha Bridges et al' lawsuit, against the proposed MSJC Wildomar Campus, lost in the court of appeal when they affirmed the lower court ruling.

Meaning: add another tally to their vast loss column.

For those that aren't sure what this is about, here is a link to a Press Enterprise editorial about it from December of 2015.

Here's a link to a blog I wrote about the editorial the same day.

I started to pull highlights from the document but then realized that was an impossibility. It's 28 pages long, and has over 7,000 words in it, estimated to take more than 35 minutes to read. No thanks, we all have real lives.

For those that would like a taste of the actual findings in the PDF, here are the opening couple of paragraphs before they delved into the "Factual Background" of the case.

This California Environmental Quality Act (CEQA)1 case arises from a community college’s decision to buy a plot of vacant land from a regional park district for potential future use as the site of a new campus. Plaintiffs and appellants Martha Bridges and John Burkett (appellants) are residents of Wildomar, the city where the land is located.

The trial court dismissed the action in its entirety, and we affirm. As we explain, appellants did not exhaust their administrative remedies before filing this suit and have not demonstrated they were excused from doing so. And, even if the exhaustion doctrine did not bar appellants’ suit, we would affirm the court’s ruling because both of their CEQA claims lack merit.


As to their first cause of action, CEQA does not require the college to complete an EIR before signing a purchase agreement, especially under these circumstances, where the agreement itself requires the college to complete an EIR before the sale can be finalized. As to their second cause of action, the college is exempt from formally adopting local implementing guidelines because it uses the guidelines of another California agency.

Sorry, but I don't have a link to the PDF. If you'd like the complete 28 page report, ask the city to send you a copy.
My three favorite parts of the findings were as follows:
• From page 2
The trial court dismissed the action in its entirety, and we affirm. As we explain, appellants did not exhaust their administrative remedies before filing this suit and have not demonstrated they were excused from doing so. And, even if the exhaustion doctrine did not bar appellants’ suit, we would affirm the court’s ruling because both of their CEQA claims lack merit.

• From page 28
We conclude the second cause of action lacks merit and affirm the trial court’s dismissal.

• From page 28 (last thing before the three judges' names)
DISPOSITION
We affirm the judgment and award costs to respondents.

Does that mean what I hope it means?

Could it be that they'll actually have to pay something out of their own pockets?

Heck, they've only delayed the start of the project by many, many years... what's it to them if it's not opened in time for your kids to attend that campus?

No biggie. Just the actions of a community activist, looking out for what's best for the rest of us... just "following her heart." LOL


If it's not too much to ask, I'd like to request that Wildomar's most infamous litigant stay out of the news for a few months... my keyboard needs a rest.
•          •          •
In the world’s broad field of battle,
In the bivouac of Life,
Be not like dumb, driven cattle!
Be a hero in the strife!
– Henry Wadsworth Longfellow,
excerpt from A Psalm of Life

Wildomar Rap is the antidote if you've been caught up with the dumb, driven cattle. Be it in the broad field of battle, the bivouac of life or the pages of Nextdoor.
Posted by Joseph Morabito at 3:10 PM