• Wildomar Residents Give Back

It's always nice to hear about community involvement on a local level.
Wildomar resident David Masters, and his second grader grandson Nathan Merritt, were some of the keys behind the donation of a "Buddy Bench" at Nathan's school, Withrow Elementary. 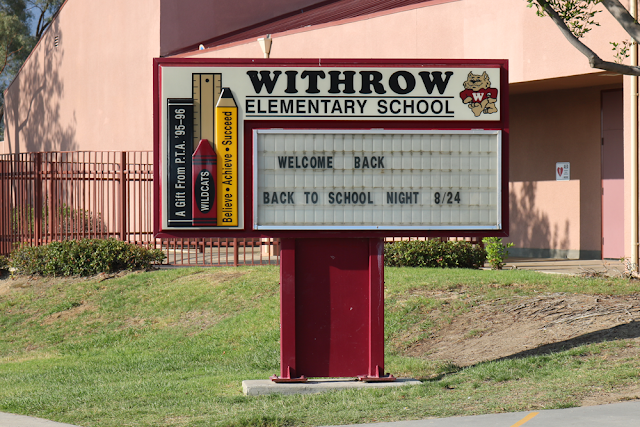 Withrow's principal, Mr. Baskent, started their usual Friday morning assembly where they had the pledge of allegiance, and a couple of songs before he told them about the new bench.
At which point he handed the microphone over to David Masters to say a few words about it.


This project was started by my grandson Nathan Merritt. He approached me last year —he wanted to have more friends here at this school. We talked a little bit about different ways how he could make some friends. I'm not sure how he [came up with the idea of a bench] but he said, "maybe we could have a bench or special lunch table to meet some friends."
We talked with Mrs. Conkright and we came up with this idea. I didn't make this bench myself, Ed [Munguia] built this bench for us, and his friend (Michelle Blair) put the stenciling on it, and I hope you guys like it. [We're] hoping that all of the students will be able to use this bench as a way to promote friendships and make new friends."
After the assembly was over, I had a chance to ask Ed how he got involved with the project.

"I started making these [types] of benches back in April, and I started selling them online. Mr. Masters contacted me [and asked], "Would you be willing to donate one of these to a school?""

He's made thirteen of these types of benches so far, and his method involves re-purposing old headboards that people no longer want. He has made some with new headboards too.
The bench will be placed on the primary playground once the professionals have a chance to secure it appropriately. Mr. Baskent also mentioned the possibility of getting a similar bench for the upper playground too.
Way to go Nathan, it's always uplifting to read about young people taking an active part in their communities. Keep up the good work. ☺

With  Wildomar Rap you get both "the smallest acts of kindness" and delivered with the "grandest intentions".

errr... that sounded better in my head than it does written out.
Posted by Joseph Morabito at 3:23 PM