At about 4:00pm on Thursday February 15th, Golden Spoon (in the Albertson's shopping center) was robbed at knife point. 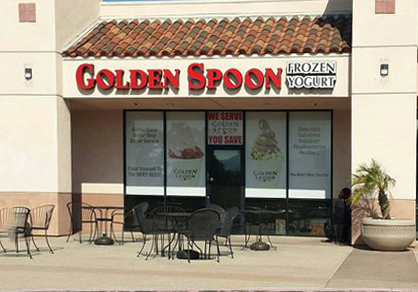 There is security footage that shows two workers chatting behind the counter. At the 1:40 mark of the video (below), the perp entered the store wearing a bright red football jersey with the number 11 on it. A Kansas City Chiefs, Alex Smith, Jersey to be exact.
The robber placed an order and at the 1:50 point in the video the other employee left the establishment at the 2:30 mark. A mere 15 seconds later he pulled a knife on the employee while the cash drawer was opened to record the sale.
The thief made off with an undisclosed amount of cash, as he left his frozen treat behind and what looks like a ten dollar bill in the cashier's hand.

In short, if you recognize this idiot Chiefs fan, that is obviously begging to take a spin through California's justice system, please call the Wildomar/Lake Elsinore Police Department non-emergency Number: (951) 245-3300

On Thursday, February 15, 2018, about 4:00 p.m., officers from the Wildomar Police Department responded to the Golden Spoon Yogurt Store on Clinton Keith Road in Wildomar, regarding a robbery. Officers arrived on scene and learned a suspect ordered a yogurt dessert and appeared to offer the clerk payment for the order. When the clerk opened the cash register, the suspect brandished a knife and demanded the money. The clerk fearing for their safety, surrendered an undisclosed amount of money and the suspect fled the business. Responding officers searched the area, but were unable to locate the suspect. Detectives conducted follow-up investigation, and with evidence collected from the scene, assistance from other businesses, and the public’s help on Social Media suspect leads were developed.
On Tuesday, February 27, 2018, detectives continued to follow up on leads and interviewed Patrick Eduardo Kitts, 21 years old and a resident of San Diego. Kitts, who was in custody in a San Diego County Jail for an unrelated charge was arrested for the robbery. Kitts remained in custody in San Diego County and robbery charges will be filed in Riverside County.


Anyone with additional information is urged to call Investigator Kelleher of the Lake Elsinore Station at (951) 245-3300.
Posted by Joseph Morabito at 10:01 PM