I hope everyone had a pleasant New Year's Eve, and are in for a great 2020.

(I'm so ready for the holiday season to be over) 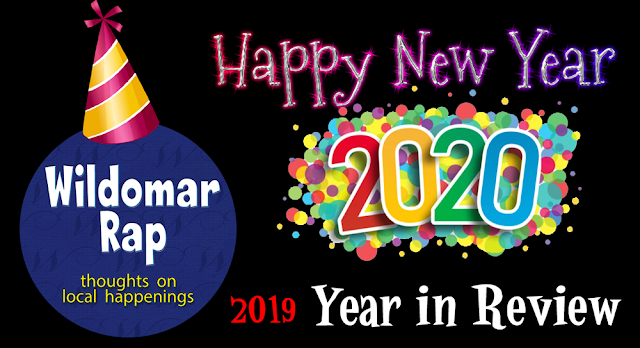 These are my top 20 Wildomar stories of 2019 (Chronologically listed)
1) Let's start with mother nature. It was one of the wettest Winters I've seen during my years living in Wildomar.

Link to blog with similar photos
2) Walmart made it official: No dice in Wildomar.
After more years than most of us have fingers, Walmart finally stopped jerking the city around and broke up with us. 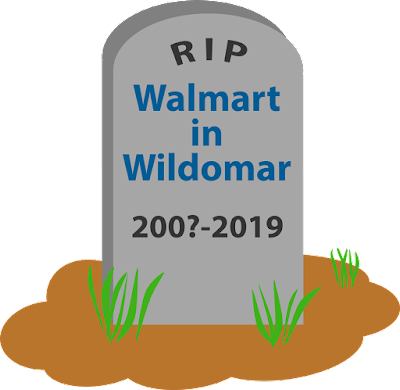 3) At the May city council meeting, a subcommittee was formed to come up with an ordinance regarding commercial cannabis in Wildomar.

Though this was asked to be on the agenda by Mayor Pro-tem Dustin Nigg in December (2018), by me in January and Ben Benoit in February, it took until May to put this on the agenda.

A move that has cost the city, in addition to time wasted, an additional $56,000 in having to go through an extra hoop (CEQA) that didn't come about until October.

4) With the help of SWAG and a different vision brought about by new Sheriff Chad Bianco, the vagrant encampments were no longer tolerated.

Before you come back with, "But they keep popping back up". Yes, sadly that's the case, and will continue to be our reality as long as the state continues its reckless course when it comes to how "homeless" people are dealt with.
5) Smoke shop tried to open 100 feet from Wildomar Elementary, and was shut down after Wildomar Rap broke the story and the community got into action.

Link to blog
7) In June, the city held its first "all inclusive" event for adults with special needs. 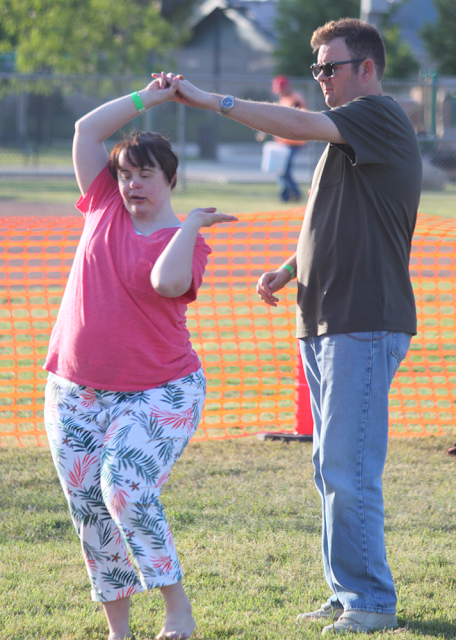 8) Wildomar gets dedicated motor officer.
9)  Though it happened just over the city line into Murrieta, the gas explosion in a neighborhood just off Clinton Keith affected Wildomar too.

10) Street light conversion. After many years in the making, the city completed the streetlight conversion from LPS to LED and took over ownership of the poles. (There are still some areas that are in the process of conversion and a smattering of lights that were missed, but it's being addressed)
Link to blog
11)  Fire in Tenaja. The fire was never in the city of Wildomar, but we were blanketed with the smoke from it.

Link to blog covering fire
12) September saw Wildomar's 2nd annual Mariachi Night at the park. Great fun and great music. There were other great park events in 2019, but there is only so much room in cyberspace to recount them all.
Link to blog
13) rePlanet recycler behind Albertsons closes. Though it has made it inconvenient for locals to recycle, it's also made it inconvenient for transients to recycle too. Which, coincidentally, has made visiting the Albertsons shopping center a much nicer experience. 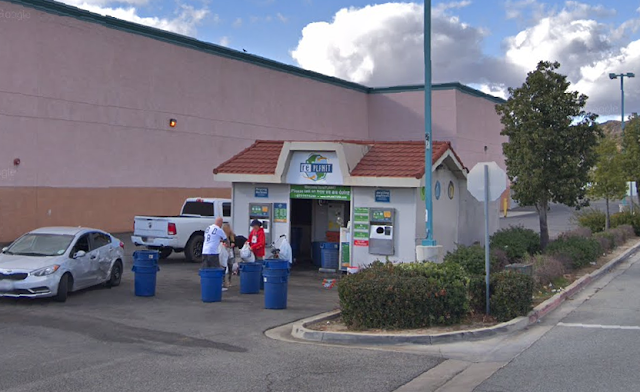 14) Arrest and eventual suicide of Windsong Valley resident in regards to allegations of sexual contact with a minor. This was approached like an active shooter situation with the man said to be in his home with a gun.

Link to blog
15) Wildomar sees the first of five (or is it six now) illegal cannabis grows busted up. The reason why these are here is directly tied to the laissez faire attitude by the old Sheriff. With our new Sheriff, there has been a marked uptick in police action on many quality of life issues.

Link to first blog on the matter 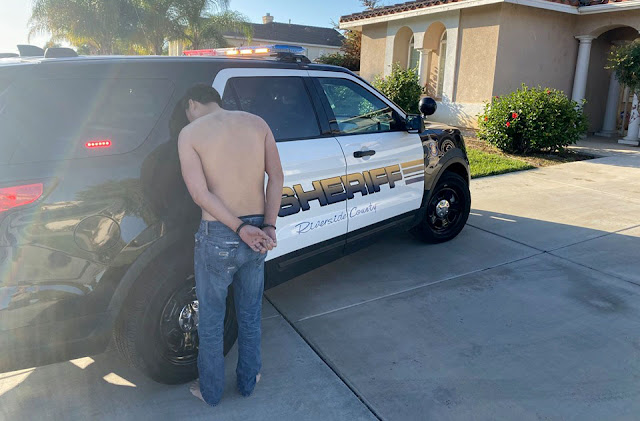 16) Wildomar Shooting Range and Academy. This story basically melted the internet with over 8,300 blog views and 15,000 hits on Facebook.

17) Nate's Pantry at David A Brown Middle School. A nice story about a local teen that wanted to give back to those less fortunate. 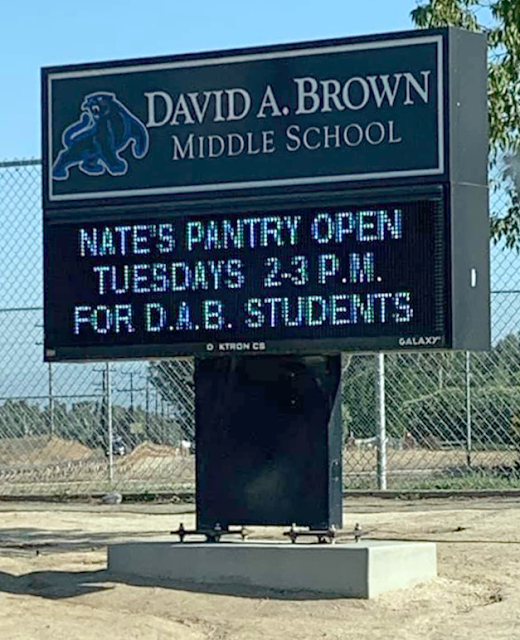 18) The nuisance banners that were at Inland Valley Drive for years were FINALLY removed by the city. It only took years of whining about them, but it got done.
If you forgot what it used to look like, here's a quick trip down memory lane.
For those of you that think such banners are no big deal, go to Costco in Lake Elsinore sometime, the entrance closest to their gas pumps, and look at all the signs that city allows to stay up.


There are a few other items of note
19) The city, partnering with the Chamber of Commerce, held monthly "community coffees" open to the public, held the second Tuesday of the month.

It's still not a well attended event, but I'm glad this is happening and there are livestream videos posted on the Chamber's facebook page: Link

20) The city began live streaming all city council meetings and planning commission meetings. Here is a link to the page. Bookmark it for future use.

20 jr) The city brought back its Facebook page, and in July started posting regular city related updates. If you're not already following the page, use this link to go there and do so.

Did I miss any significant stories? I'm pretty sure I did, but I'm one guy with a ton of things on my plate... and this is the best I could do. Happy New Year! ☺

Review of my first year on council
With finishing up my first year as your city councilman, I can tell you that I've learned a lot, and see that I still have more to learn.

It's my goal to represent your interests, not mine. I don't have any pet projects in mind... other than to clean up our city.

Getting rid of the weeds in the public right of way, the trash alongside the roads, nuisance signs/banners, increased code enforcement and other low hanging fruit like that. Those are easy(ish) to accomplish; big projects (like new roads), aren't.

It's never my intention to step on any of my fellow council member's toes, or that of staff, but I'm going to risk it in the name of more completely representing the residents of Wildomar. Sorry in advance if your toes end up suffering some minor damage along the way.

I've attended countless meetings, away from our one city council meeting a month, in the name of the city. I represented the city at Student of the Month events and ribbon cuttings. I attended nearly every park event in an attempt to be easily accessible to the residents; to say "Hi" or to hear a concern.

I also published 88 blogs that dealt with things happening in Wildomar.

I've responded to all the emails I've received (jmorabito@cityofwildomar.org), and returned all the phone calls I've gotten (951-440-2284).

One hitch when it comes to phone calls: I DO NOT answer my phone if it's an unknown number. If you're not already listed in my phone, leave a message and I'll get back to you as soon as I can.

Also, unless I warn you ahead of time, I DO NOT use call waiting to interrupt a call with you to take another call. However, if I were to be on the phone with you and the City Manager, City Attorney or Mayor were to call, I'd be making an exception to that rule.

From time to time there are going to be controversial and divisive items on the agenda
There's a chance I will be voting in a way that you disagree with. I'm open to conversation about it, but I won't be bullied into voting your way if I've determined otherwise.

If my style, approach or votes don't sit well with you, I understand. You have the right to dislike me, and/or my approach, for any reason and you don't have to justify it... if that happens, I'll still be here to help you with a city issue when one comes up and you need assistance.

If you use Facebook, follow my city council page for the latest updates that aren't blog-worthy. There I've uploaded a preview of the city council meeting agenda every month for you to review, and I plan on keeping up the practice in 2020.

Wildomar Rap has never been a fan of Charlotte's penchant to deceive gullible ol' farmer Zuckerman. "Radiant" my ass!

Posted by Joseph Morabito at 11:01 AM