The city of Wildomar has started a beautification program. Part of that includes 10 free garbage bags a month if you sign up.

Here is the press release from the city:

After filling out the online form, you can go to the cemetery to pick up 10 bags per month. These are some very large bags, and pretty sturdy too.
While there, you'll get a piece of paper with a QR code to use after you're finished collecting trash for the day. The idea is to leave the bags on the side of the road, and then use the QR code to let the city know precisely where the trash bags are. They'll come by the next business day to haul them away. 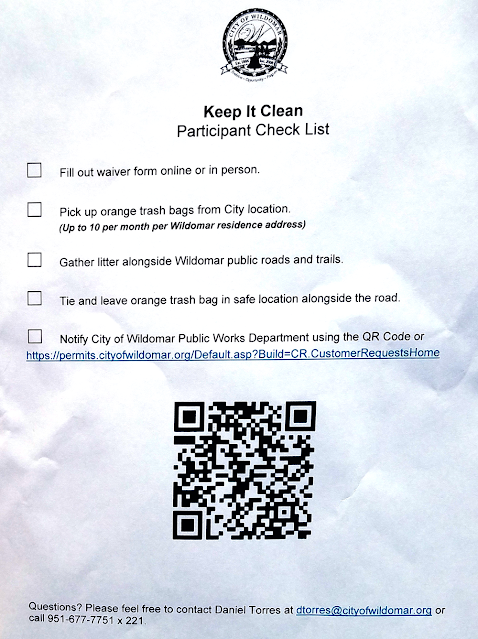 The QR code sends you to the proper city website and from there you can add the location. You do need to create an account first, but it only takes moments to do, and you can use a pen name if you prefer that to what's on your birth certificate.

Of course you don't need to be part of a concerted effort to pick up litter. Even if you just picked up a few pieces that may be along your street, that would be a benefit to many.

If you'd like to be part of the larger effort, still not an official city endeavor, and backed by Mayor Pro-tem Bridgette Moore and Councilman Joseph Morabito please search for Wildomar Beautification Volunteers on Facebook.

This is a work in progress

So far Bridgette and Joseph (that's me to the uninitiated) have gone out for an hour once a weekend for about the last ten weeks, except one, to pick up litter. She's such a good leader that she even bought the vests you see in the photos above... she's going to wash them between uses too.

We envision this becoming a bi-monthly event. No pressure to attend, and even if you were to come out just once a year, that would be great. It will also be a great way for students to get community service hours.

Based on Lucky Lucretius's words, Wildomar Rap is about the wealthiest entity within several country miles.
This blog was produced for viewing on a desktop or a laptop. Though it's been optimized for smartphones, the formatting can look odd on a smartphone or if you get this delivered through email (such as missing video links). Link to proper format.
Posted by Joseph Morabito at 2:52 PM No comments:

A very productive meeting highlighted by the start of the Bundy Canyon Road improvement countdown!

TOP NEWS FROM THE MEETING

I'm promising a brief blog... time constraints and all.

It started with a proclamation making September 17-23 US Constitution Week. Suggesting that every citizen has the duty and obligation to study the constitution, its history, defending it and preserving it for posterity. 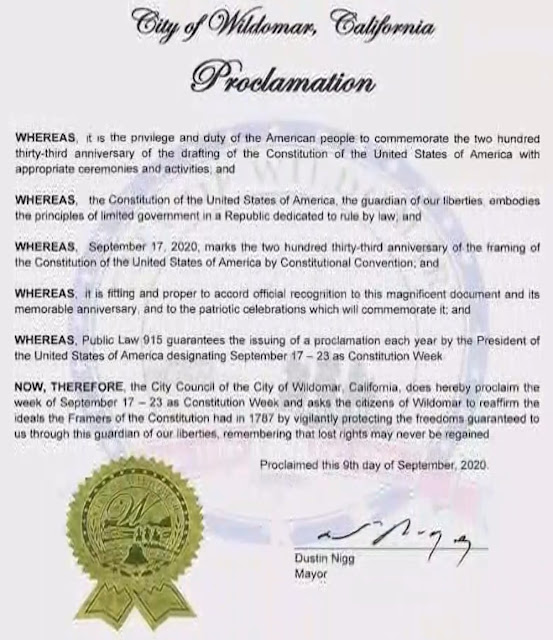 2020 has been a trying year for much of the nation, and it hasn't helped to watch how our US Constitution has been so badly disrespected by many elected leaders in many major cities in this nation... under the false premise that this is an evil nation founded on racism.
START ENFORCING THE LAWS ALREADY
Being a city council member, of any city, is one of the lowest rungs on the ladder in our elected representative based form of government, but I for one fully repudiate such a disgusting notion as the one that has been promulgated by far left groups and ushered along by a complicit political class and a sycophantic media that refuses to report the news and gives safe harbor to such groups and demented philosophies.
I hope I was clear and unambiguous above. Our nation is great, despite it's flaws, and we owe that to the founding fathers that put our Constitution together. Period, end of story.

The contract has been awarded to James McMinn Inc $6,883,950.30, for the first phase of the Bundy Canyon Road improvement project.

The City has divided project construction into three phases. The first phase is the western segment from Cherry Street to 1,400 feet east of Oak Canyon Drive. (Segment 1).

The second phase is the middle segment from 1,400 feet east of Oak Canyon Drive to The Farm Road (Segment 2).

The third phase is the eastern segment from The Farm Road to Sunset Avenue (City boundary) (Segment 3).

The City is moving forward with the construction phase for Segment 1, which will include widening Bundy Canyon Road from two to four lanes from Cherry Street to 1,400 feet east of Oak Canyon Drive, including construction of drainage improvements and sound walls.

The improved roadway would have a 14-foot wide striped median, four 12-foot-wide travel lanes (two lanes in each direction), 8-foot-wide dirt shoulders within an asphalt concrete dike on each side, and another 9- to 10-foot-wide outside shoulder on each side.

Traffic signals would also be installed at the intersections of Bundy Canyon Road with Sellers Road and Monte Vista Drive.

No set schedules for construction of Segments 2 and 3 have been established.

Remember, this will NOT be the entire stretch of the road, much less the complete route between the I-15 and I-215, but it's the beginning.

Please watch the video for more details. The item begins at the 1:38:50... there are plenty, plus the discussion of the city council leading up to the 4-0 vote to approve.

Yes, the agenda items are out of order here... because Bundy Canyon was the big news!

The update is basically that we're still under some form of lock down. Sorry for not being specific, but this is well beyond tedious at this point. We now are under a color coded scheme that doesn't even include a green color, which would indicate fully opened.

You can see by the graphic, that even when we achieve the best case scenario (yellow) it still means things like churches are still half closed.
Wildomar Rap opinion time
Like I stated during the council discussion portion of the meeting, it's time to open things back up... all the way.
Yes, the virus is real. Yes, there's nothing wrong with respecting distances between people. Yes, you're a clown if you whine about wearing a mask in a populated area (especially indoors in someone else's business). Yes, people that are in high risk groups need to self police, self isolate. We know the risks and the best practices to stay as safe as possible.
I heard the following comparison on the AM morning show Armstrong & Getty.
Every aspect of our lives comes with a calculated risk.
In a recent year more than 1.3 million people died in car crashes throughout the world. We could nearly eliminate the majority of those deaths if we posted and enforced a maximum speed of 10mph.
But we've made that trade off, knowing full well that there will be many deaths —and even more permanent injuries, by allowing the speed limits to be high enough to live our lives the way we are accustomed.
The exact same principle exists with Covid 19. It's time to remember (if you're among those that have forgotten) that life isn't guaranteed.

This established guidelines for how multi-family developments will look and be designed in Wildomar. A lot of work on the part of staff and the planning commission.

Thing is, Wildomar is mostly built at this point, and though it's good to have this, it's not going to be used retroactively. If you'd like to see the presentation please cue up the 51:30 mark of the video below.

If Wildomar Rap was chocolate, there's no doubt that it would be a few degrees north of bittersweet.

Posted by Joseph Morabito at 6:11 PM No comments:

What a treat to be invited to young Jack's 4th birthday as CR&R came by with gifts and a drive by.

I asked Jack's mom Anna when his interested in trash trucks began, "It was about a year ago, he started hearing them outside. It didn't matter what he was doing at the time, we had to stop what we were doing and go out and look at every single trash truck... it just became a thing, out of nowhere, from one day to the next he was obsessed. On Wednesdays, 'oh it's trash day, it's trash day', and that's all that mattered."

Anna continued, "We let him pick his birthday theme every year and he said he wanted a trash truck birthday. We thought, 'okay will have trash truck decorations' and stuff like that."

Ally Price of CR&R saw a video of Jack on Facebook as he was watching a trash truck on its usual Wednesday route. CR&R wanted to help celebrate his birthday and what a memorable event it all turned out to be! 😊

It's nice to see the kindness that is in our community, not always visible, but always present. 🙂

– Abraham Lincoln
Wildomar Rap isn't water soluble, so being washed out is less of a worry than most other blogs.
This blog was produced for viewing on a desktop or a laptop. Though it's been optimized for smartphones, the formatting can look odd on a smartphone or if you get this delivered through email (such as missing video links). Link to proper format.

Posted by Joseph Morabito at 11:34 AM No comments: