If you were driving down Grand Avenue, where the old Brown House once sat, you saw a lot of people with metal detectors.
A facebook friend had alerted me to the mid morning dig, so I went over to see what was what. 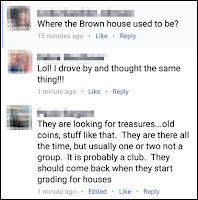 As it was, it had already been somewhat of a topic on local facebook pages by that time.
The de facto leader of the group was an amiable gentleman named Larry Englehart out of Menifee. He was telling me that he was given the a-ok to be out there by an RSO deputy, as long as they filled in their holes.

They'd heard that tract houses are slated to be there and wanted to dig up whatever was there before it was too late. They were out there for about 3 hours and found many old coins and other bits of metal.
Though they aren't a particularly organized group, mostly just metal detecting enthusiasts, I asked if they had a facebook page if others in the area were interested in knowing more, but they don't.

I was told that if a person left a comment on his youtube channel, that would be the best way to get in touch.

LINK TO HIS CHANNEL

I chatted with a couple of local Wildomartinis that had found several old coins, and some toy cars. They let me take some pics of their finds.
Another great find was an 1865 Indian head penny.
It was a great morning to be out and about. Who doesn't love Summer... especially when it's in the rear view mirror and 270 days away from returning? ☺

There is more treasure in Wildomar Rap than all the pirate's loot on Treasure Island too... since it's not a real place and all.
Posted by Joseph Morabito at 1:24 PM No comments:

If you've thought about participating in the running of the city, but didn't know where to start, the Measure Z Committee is a good entry level position. You can be as young as 18 years of age.

Looking to give back to your community?

We are in need of two Wildomar residents to volunteer for the Measure Z Oversight Committee.

Two unexpired terms of office vacancies have been created on the Measure Z Oversight Advisory Committee.

The Committee is comprised of five members and serves at the pleasure of the City Council. The City Council appoints all members to the Committee. These vacancies will be to an unexpired term of Office ending February,
2018. Applicants can be from anywhere in the City limits (at-large).

Committee meetings are held on the fourth Thursday, at 6:30 p.m., in the months of February, May, August, and November.

All Committee members serve with no compensation.

If you are interested in applying, please complete the application which can be picked up at City Hall, 23873 Clinton Keith Road, Suite 201, Wildomar; Call 951/677-7751 and an application will be sent to you; or download it from the City’s website at

www.cityofwildomar.org
(direct link to application)
All applications must be returned to the City Clerk no later than 5:00 p.m., on Monday, October 2, 2017.
There are only four meetings a year, and very little actual responsibility. You'll be asked to read over the expenditures pertaining to the maintenance of the parks in Wildomar, and also do a yearly assessment of them too.

Wildomar Rap thinks that 'well done' is better than overdone, but not as good as medium rare.
Posted by Joseph Morabito at 11:01 AM 2 comments:

That locally we send high school juniors to a leadership camp (RYLA), we put on the yearly Bicycle Safety Event that is held at Marna O'Brien Park and the tradition of Breakfast With Santa at the fire station... to name just a few things.

The kids read the Rotary's 4 way test, which was affixed to the inside covers:
They then tested out their new dictionaries by looking up a word of their choice. Of all the words this year, I think I liked "twinge" the best.

If you've ever wondered about the Rotary Club, what they're about or what they're up to, we meet for lunch on Thursdays at The Elks Lodge on Mission Trail at 11:45am... or just ask us if you see us at a local event.

If you've lived in Wildomar for more than a couple of years, you've heard about Wildomar Square for more than a decade. The first sign I saw suggested that it would be opening in Fall of 2008, but the recession came and put it on the back burner.
So far back on the burner that it lost it's original anchor, In-N-Out Burger (or so the story goes), but The Habit will make everyone else forget about them in short order.

With all that water under the bridge, Wildomar Square is finally getting set to open... at least in part.

I've noticed that the Taco Bell has looked ready for business for a couple of weeks now, so I thought I'd stop by and take some pics to share.
While there, I spoke to one of the managers (or was he an owner?) and I learned that they had been hoping to open last Saturday (September 16th, 2017), but it's been pushed back to sometime this week.

Bear Creek Optometry, which is currently in the shopping center directly west from Wildomar Square, is going to be relocating to the new center. I stopped by and learned that they anticipate the move to be around the start of the new year.

Another business that will be coming online is called Petrichor Float. They use sensory deprivation tanks for the process of "helping and healing the victims of PTSD and other stress related conditions that traumatize the body and soul".

There are several businesses in the shopping center that are very close to opening too. Where others appear to have many months left before they'll be able to open for business, one of the buildings hasn't even had the foundation poured yet.

Below are several photos to give you a feel of how far the construction progress is to this point.

Follow their facebook page to know when they'll be opening.
Link to their website
In total, there are said to be 21 occupants that have signed to do business there, and there remains a few open spots. The site is over 45,000 square feet in total and sits on the southwest corner of Clinton Keith and I-15.

The one thing I haven't seen under construction yet is the 65 foot high sign, with the 200sf LED display, that will be visible from the freeway.
You'd think that the owner (and the businesses) would want that thing up BEFORE they opened, not after. Either which way, this center is getting ready for your business.
•                •                •
“The pessimist looks down and hits his head. The optimist looks up and loses his footing. The realist looks forward and adjusts his path accordingly.”
— King Ezekiel from The Walking Dead, writer Robert Kirkman.

Thanks to the efforts of Girl Scout Marissa Hill, there is a new drinking fountain at Marna O'Brien park.

For those that aren't familiar with what a Gold Award is, it's the Girl Scout equivalent to an Eagle Scout Project.
It's not just your average water fountain. It accommodates people in wheelchairs, has a specially designed basin for dogs, plus a way to fill up water bottles too.
Below is one of the first canine customers getting a taste of water from this new fountain. 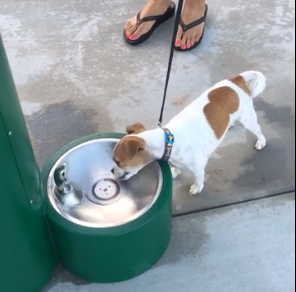 I know that Marissa has been working on this project for many, MANY months. I wrote a blog about one of her fundraisers that occurred back in January.


Link to blog
She has put more than 80 hours into this project and more than 40 volunteers along the way. Which included family, friends and various community members.

She first started thinking about project ideas for her Girl Scout Gold Award last September, and it was approved by the Southwest Gold Committee on October 5th, 2016. She began fundraising in December 2016. She had a table at the yearly Breakfast With Santa event that is held at the fire station.
I asked Marissa for some thoughts about the project.

I would of course like to thank my mom and dad for all there support.

As well as Murdock Mfg., Bridgette Moore, VFW, Elks Lodge, PVM Maintenance, DeJong's Dairy, Wildomar Rotary Club, the City of Wildomar, Brad Evans, George Cambero, Joseph Morabito, and especially my Girl Scout troop 1122. This is honestly a small list, so many people have been so helpful, and I appreciate all their support!

Completing a Gold Award feels amazing because I know that I was able to help my community.
This has been such an amazing experience. People have been so kind, and I have learned so much. Thank you!
I then asked if she had any words of encouragement to other scouts that are contemplating such a project of their own.

My advice to anyone who is thinking about tackling a Gold Award or Eagle Scout [project] would be to pick something you are passionate about. You will have some ups and downs, but if you love your project it will motivate you to keep going. Once the project is done it's great to know that you were able to make a positive impact on your community, and that is the best reward. You got this!

Thank you to Marissa Hill for working so hard for our community, and thank you to her parents for raising such a thoughtful young woman.

We here at Wildomar Rap always demand the best. Whether a person glows afterward or not, is strictly up to the individual.
Posted by Joseph Morabito at 11:01 PM No comments:

What do you get when you mix great music with family and friends, a Rotary Club beer garden and an unexpected soupçon of rain?

You get one helluva good time! ☺

This concert in the park had nearly 300 people attending, and though there was a short rain delay that prompted the attendees to seek some shelter, or go to their cars to get umbrellas, I'd say this was one of the most enjoyable evenings that Marna O'Brien park has ever seen.
At the midway point of the show, the band announced that this was their last gig. I guess that all good things have to come to an end, and this was Arena's finale. Great job fellas, and thanks for the two shows you played in Wildomar.

They didn't disappoint as each of the 70's and 80's covers they played were spot on. I heard one person remark that they'd recently seen Styx at Pechanga and that Arena's versions of their songs were just as good as that of the legendary band.
This was the last concert in the park for 2017, but there will be another great park event in just a couple of weeks.

Astronomy Night hosted by local astronomy buff John Garrett. Be sure to come out to Marna O'Brien park for that one on Saturday, September 23rd.
To better keep up with park events I'd refer you to the city's facebook page, but for some inexplicable reason, they still don't have one.

Wildomar Rap loves the hot weather, but is ready for cool Autumn and a long cold Winter after that.
Posted by Joseph Morabito at 8:49 AM No comments: